Par Clearance in the Domestic Exchanges: The Impact of National Banknotes (WP 97-4) 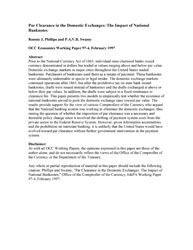 Prior to the National Currency Act of 1863, individual state-chartered banks issued currency denominated in dollars but traded at values ranging above and below par value. Domestic exchange markets in major cities throughout the United States traded banknotes. Purchasers of banknotes used them as a means of payment. These banknotes were ultimately redeemable in specie or legal tender. The domestic exchange markets continued operations after 1863, but after the prohibitive tax on state bank issued banknotes, drafts were issued instead of banknotes and the drafts exchanged at above or below their par values. In addition, the drafts were subject to a fixed remittance or clearance fee. This paper presents two models to empirically test whether the existence of national banknotes served to push the domestic exchange rates toward par value. The results provide support for the view of various Comptrollers of the Currency who argued that the National banking system was working to eliminate the domestic exchanges, thus raising the question of whether the imposition of par clearance was a necessary and desirable policy change since it involved the shifting of payment system costs from the private sector to the Federal Reserve System. However, given information asymmetries and the prohibition on interstate banking, it is unlikely that the United States would have evolved toward par clearance without further government intervention in the payment system.