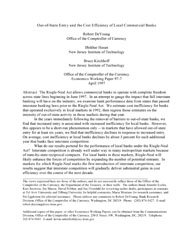 The Riegle-Neal Act allows commercial banks to operate with complete freedom across state lines beginning in June 1997. In an attempt to gauge the impact that full interstate banking will have on the industry, we examine bank performance data from states that passed interstate banking laws prior to the Riegle-Neal Act. We estimate cost inefficiency for banks that operated exclusively in local markets in 1992, then regress those estimates on the intensity of out-of-state activity in those markets during that year.

In the years immediately following the removal of barriers to out-of-state banks, we find that increased entry is associated with increased inefficiency for local banks. However, this appears to be a short-run phenomenon only — in markets that have allowed out-of-state entry for at least six years, we find that inefficiency declines in response to increased entry. On average, cost inefficiency at local banks declines by about 3 percent for each additional year that banks face interstate competition.