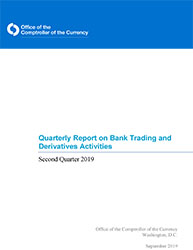 The Office of the Comptroller of the Currency (OCC) reported trading revenue of U.S. commercial banks and federal savings associations of $8.0 billion in the second quarter 2019, which was $2.0 billion, or 19.8 percent, less than the previous quarter.